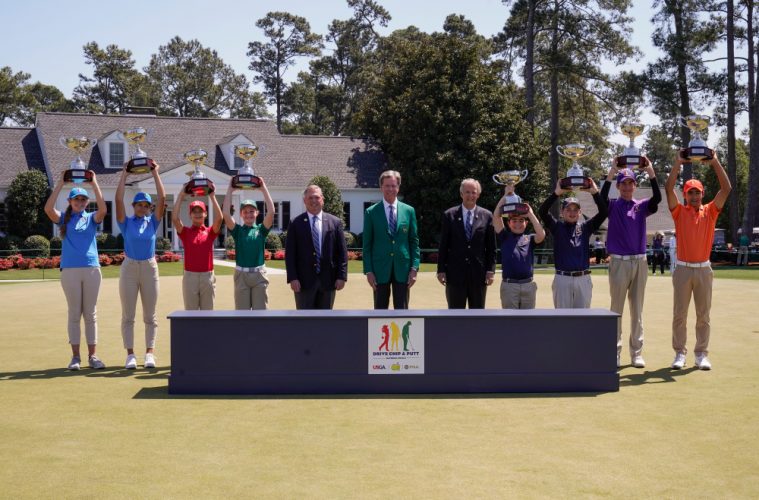 Registration Now Open for Next Qualifying Season at DriveChipandPutt.com

Conducted in partnership between the Masters Tournament, the PGA of America and the USGA, Drive, Chip and Putt is a free youth golf development initiative for junior golfers of all skill and ability levels, aimed at sparking a lifelong interest in the game. The initiative welcomes boys and girls, ages 7-15, in four age categories.

Tens of thousands of participants had the opportunity to qualify for the event, which began with more than 300 local qualifiers at courses across all 50 states in the summer of 2019. From there, the top finishers advanced through more than 60 subregionals to one of 10 regional qualifiers at some of the nation’s most acclaimed venues and championship sites.

Finally, the 80 regional winners across the four age divisions (40 boys and 40 girls) earned a trip to Augusta National Golf Club to participate in the Drive, Chip and Putt National Finals. Due to the COVID-19 pandemic, the originally scheduled 2020 National Finals were postponed, and the 80
National Finalists were invited to compete today in the 2021 National Finals on the eve of the Masters Tournament.

“Our goal since the founding of this event was to provide opportunities that would inspire young boys and girls to develop and deepen their love for the great game of golf,” said Fred Ridley, Chairman of Augusta National Golf Club and the Masters Tournament. “These 80 National Finalists showed immense passion and talent, and seeing them perform at Augusta
National is something we are proud and fortunate to celebrate.”

“Drive, Chip and Putt is a showcase for the future of the game,” said PGA President Jim Richerson. “Starting at the grassroots level with events hosted by PGA Professionals across our 41 Sections nationwide, junior golfers have an opportunity to achieve an amazing dream of competing
in the National Finals at Augusta National. The talent on display today was outstanding, and we congratulate each of the finalists, led by the eight girls and boys who will now hold the title of Drive, Chip and Putt champion.”

“We are thrilled to successfully add another Drive, Chip and Putt to the history books,” said Mike Davis, CEO of the USGA. “Each year we are consistently impressed with this talented group of golfers and this year is no different. We are thankful to each participant for inspiring junior golfers
across the nation, and we look forward to following their journeys in the years ahead.”

Points were awarded in three individual skill categories (driving, chipping and putting), with the winner in each skill receiving 10 points, second place receiving 9 points, and so on, all the way down to 1 point. The player with the most points following all three competitions was declared the overall
winner of the age group.

In the drive portion, the better of two distances was used for the score. Each golfer then took two chips; the closest cumulative distance to the hole determined the winner. Players then moved to Augusta National’s 18th green where they attempted two putts – from 30 and 15 feet – and used the cumulative distance from the hole to determine the score.

It was a thrilling day for Alexis Card of Cambridge, Ontario, Canada. After winning the first discipline of the day with her 205-yard drive, Card placed eighth in chipping. She then bounced back by sinking her 15-foot putt to win the putt competition and become the overall champion in her age
group with 23 points, edging out fellow Canadian competitor Anna Wu by two points.

When she saw her name atop the leader board, she said her mind went blank for a second. “I couldn’t believe it. It’s just amazing.”

After winning the chipping discipline and finishing third in driving, Elyse Meerdink of Tampa, Fla., was the leader in her age group by three total points. On the storied 18th green at Augusta National, her first putt rolled long, but a determined Meerdink steadied herself, resolving to sink her
15-foot putt attempt and take home first place overall.

“After the first putt, I was not happy, but I was just like, ‘Please be within the range to where I still have a chance on the next putt to win,’” Meerdink said. “I just stepped over and kind of lined up and just trusted myself, and it went in the hole,” she added. “Just to play, it’s very inspiring, and it motivates me to work harder so that one day maybe I’ll be able to play in the Augusta National Women’s Amateur.”

Yana Wilson of Henderson, Nev., became a two-time Drive, Chip and Putt National Champion, having previously won in 2019. After holing her second attempt during the chipping discipline, Wilson was in first place heading to the 18th green. She needed to be within 2’ 8” of the hole to hold onto her lead—and she knocked her second putt safely within that distance to secure a one-point victory over Lucy Yuan of San Diego, Calif.

“My main goal here was just to have fun. I mean, you know you’re at Augusta National. It can’t get better than this. Except winning,” said Wilson, whose best friend Ali Mulhall won the Girls 14-15 age group earlier in the day. Of their friendship, Wilson shared that they “play tournaments together and that’s how we push each other. If one of us beats the other one, we’ll definitely work harder the next time.”

Fifteen-year-old Ali Mulhall of Henderson, Nev., is already an accomplished golfer and 2018 National Finalist. Just last year, she became the first woman to compete in the Nevada Open. She also shares her passion for golf with her best friend and fellow 2021 Drive, Chip and Putt National Champion Yana Wilson. Mulhall started the day off strong, placing first in driving with her first attempt measuring 251 yards, and followed with a win in the chip competition. She solidified her overall victory with a third-place finish in the putting discipline for a 28-point total, tied for highest score of the day.

Back at Augusta National for the second time, Mulhall said this year felt different. “I think the first year I was more in awe of what was happening and where I was at, and this year I kept my nerves more steady. I was able to take it in more and just stay even throughout the whole competition.”

Lucas Bernstein of Fresno, Calif., took home the overall title with consistent performances throughout the day. After placing third in driving and second in chipping, he kept up the momentum in the putting discipline, ultimately claiming first overall in his age group. Bernstein’s favorite song is Queen’s “We are the Champions,” and he said it feels good to return home from Augusta National as a Drive, Chip and Putt National Champion.

“I was a little anxious,” Bernstein said of his emotions today. “I’m pretty sure my dad was a little more anxious than I was. But for the most part, before the competition, I was walking, I was calm and chill. But once you got up, and you were in line and you were next, then your adrenaline gets
going.”

Brady Barnum of Dublin, Ohio, once thought he wasn’t a strong putter. After dedicating himself to lots of practice, he now loves to putt—and indeed his hard work helped him edge out the competition today. He sunk his first putt from 30 feet, and his second attempt stopped just 7” away from the hole, securing his title as the 2021 National Champion in his age group and tying the highest overall score of the day with 28 points.

Barnum, who placed fifth overall at the 2018 Drive, Chip and Putt National Finals, said of his experiences, “I put a lot of hard work into this, and it’s a privilege to be here at Augusta.”

In his third Drive, Chip and Putt National Finals appearance, Sam Udovich of Inver Grove Heights, Minn., proved to be a dominant competitor. He won the first discipline with a 270-yard drive and triumphed in the chip competition to earn a firm lead heading to the 18th green. Though he
placed ninth in putting, Udovich’s strong start to the day gave him a comfortable margin to claim first place overall in his age group.

Of his preparation during the past year, Udovich said, “Since I live in Minnesota, I’m practicing in domes, so it gave me an extra year to work on stuff. I practice on artificial grass for putting, so it’s very fast and that kind of helped me on my putting.” He added that “I was here three times, and I
think third time’s the charm.”

Moving into the putting discipline, Jaivir Pande of Houston, Texas, had a three-point advantage with second-place finishes in both driving and chipping. He lined up his putter, needing his 15-foot attempt to be 4’ 8” or closer to win, and sunk the putt to secure the victory. His seven-point winning margin was the largest of the day.

“I knew I had a little bit of a lead going into the putting, and the 30-footer—I saw it got a little quick at the end, so I was able to get that one close,” said Pande. “It was a great experience to be able to make the putt on 18.” Pande, who grew up playing golf in Nepal with his grandfather on summer
holidays, shared that “it’s great for him to be able to watch it in Nepal on TV and just see me here at the greatest stage in golf.”

Registration is now open on drivechipandputt.com for the 2021-22 qualifying season, which begins May 1, 2021, with more than 330 free local qualifiers in all 50 states for boys and girls, ages 7-15.

About Drive, Chip and Putt

A joint initiative founded in 2013 by the Masters Tournament, USGA and the PGA of America, Drive, Chip and Putt is a free, nationwide junior golf development competition aimed at growing the game by focusing on the three fundamental skills employed in golf. By tapping the creative and competitive spirit of girls and boys ages 7-15, Drive, Chip and Putt provides aspiring junior golfers an opportunity to play with their peers in qualifiers around the country. Participants who advance through local,
subregional and regional qualifying in each age/gender category earn a place in the National Finals, which is conducted at Augusta National Golf Club the Sunday before the Masters Tournament and broadcast live by Golf Channel. For more information, please visit drivechipandputt.com.

About the Masters Tournament

The Masters Tournament, inspired by the enduring philosophies of Masters Tournament founders Bobby Jones and Clifford Roberts, is committed to promoting golf’s domestic and international development through financial investment and active participation in initiatives aimed at preserving
the traditions of the game and sharing its many virtues.

The Masters Tournament – since its very beginning – strives to provide added exposure to the game of golf and inspire interest in the sport worldwide. For more information about the Masters, visit masters.com.

About the PGA of America