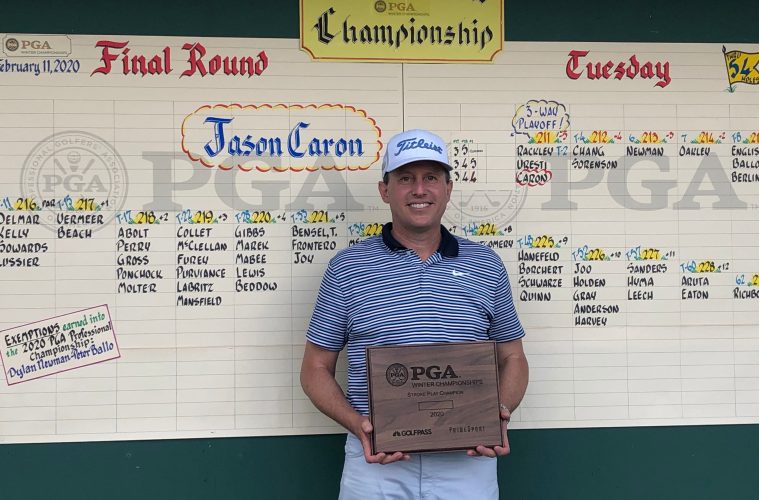 Jason Caron of Oyster Bay, N.Y. overcame a lot of “stuff” Tuesday to win the PGA Stroke Play Championship with a birdie on the third playoff hole to beat Omar Uresti of Austin, Texas.

Caron looked to be cruising to victory after back-to-back eagles at the seventh and eighth holes of the Wanamaker Course, when he holed a gap wedge from 107 yards. After birdies on the 10th and 11th holes, Caron was 5-under for the round and had a four-shot lead.

Caron played his last five holes in 4-over, however, and found himself in a playoff with Uresti and Josh Rackley. Caron won with a 2-foot birdie putt on the third extra hole to earn the $6,000 first prize.

“It feels amazing to win,” said Caron, the PGA Head Professional at Mill River Club in New York. “I had low expectations today because I aggravated my back. I had a lot of stuff going on today.”

That’s putting it mildly. Caron’s round of 1-under 71 included the two eagles, four birdies, five bogeys and a double bogey on the par-4 15th hole, where he thought he lost his tee shot. Caron had his playing partner, Alex Beach, look for the ball.

When it wasn’t found, Caron hit another drive – only to eventually find his first tee shot in the rough he couldn’t play. The double bogey loomed large when Caron, Uresti and Rackley finished 54 holes at 5-under 211.

“I learned a lesson today,” Caron said. “I should have just gone up there and looked for it, especially with us riding in carts. I couldn’t believe it when we saw a ball driving up there.”

Uresti, who also had a pair of eagles in his 71, was philosophical after he missed his 12-foot birdie putt on the third playoff hole.

“Jason should have won it in regulation,” Uresti said. “We’ve known each other for a long time, and I think he might be playing better now than ever.”

Caron made a 12-foot par putt on the second playoff hole to stay alive. Rackley (69-211) was eliminated on that hole with a bogey.

“I wasn’t really expecting a playoff,” Rackley said. “I had the same chip in regulation, and I thought I was going to make it. It hit the edge and just took off.”

The PGA Winter Championships are presented by GolfPass and PrimeSport.