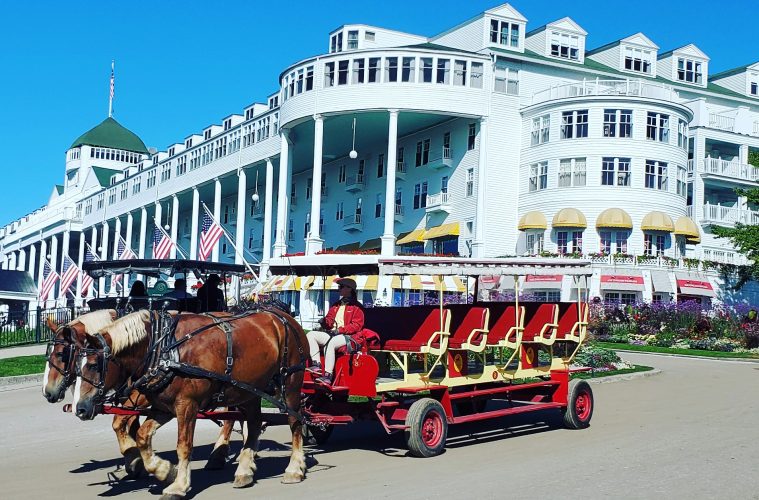 Mackinac Island was on our dream list of places to visit, so romantic and quaint, an island with no cars allowed. We conjured images of the horse and carriages, but they didn’t come close to the reality that is so fantastical.

Upon arrival on the fun Shepler’s Ferry from Mackinac City, dock porters busily attend to luggage as inventory for stores and restaurants is transferred to horse driven long wagons on the next dock. Quick, we have to take a picture of that! No worries, there are plenty of photo ops at every turn.

Most accommodations are walkable from the dock or a horse and buggy may be prearranged for delivery in style to one of the many guest houses or the very famous Grand Hotel. Their special carriage includes a grandly decked out driver. The Grand Hotel is a must stop even if you do not stay there. The $10 admission to self-tour the property is well worth it. The hotel is eminently magnificent from the distance, upon approach and throughout the entire grounds. A floral scent greets guests at the entry as arrangers are creating colorful bouquets at Margaret’s Gardens. The Cupola Bar at the top of the Grand Hotel is the highest point on the island, ornately designed inside with spectacular viewing of the Straits of Mackinac. While rocking on the longest veranda in the states we overheard part of the history. It was built with 1.5m feet of white pines that were drawn over the ice by horses, a precarious task indeed. The Livingstons clued us in to the “secret gardens” which we found strolling past the pool and lawn. It is an intimate setting with perfect horticultural patterns and dramatic angles up to the Grand Hotel. No doubt many proposals are made here. 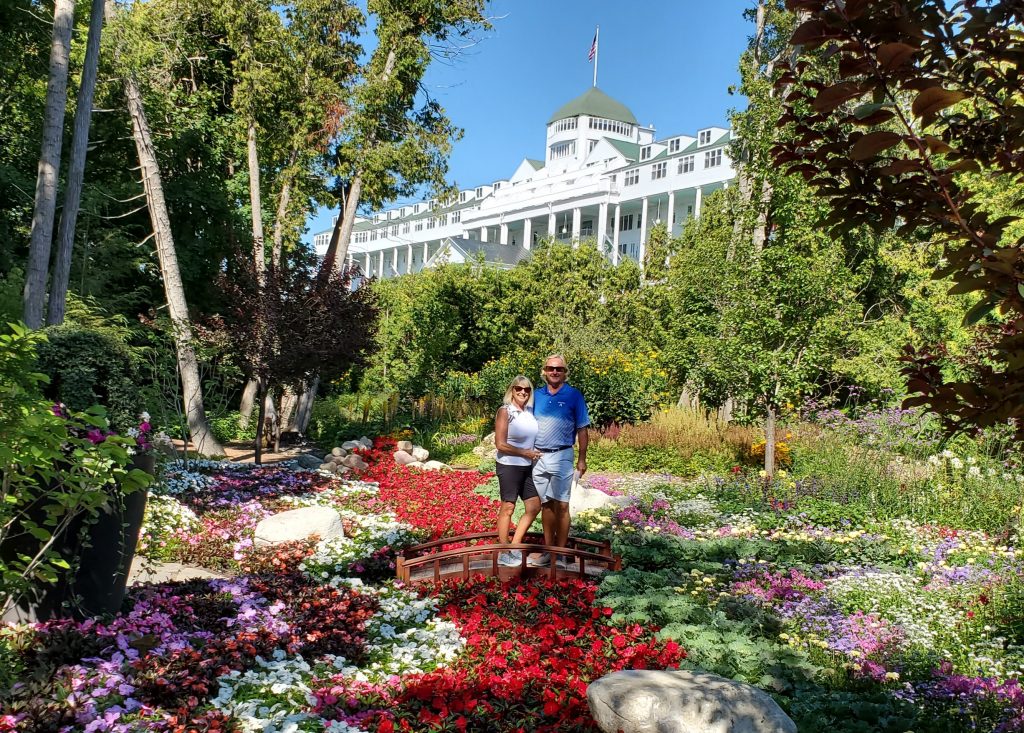 Across the street is the Grand Nine, half of the Jewel Golf Course with the Woods Nine a mile and a half above. The Grand Nine is a charming layout, flowing over the hills and valley, around streams and ponds with panoramic views of the town, Lake Huron and The Grand Hotel. It is a scenic stroll in the park with the clogging sound of hoofs leading the many carriages on the street. The course is tight with gently sloping greens, short in length but long on beauty.

While the Grand is the ultimate in luxury hotels, the new Mackinac House was the talk of the town. Well appointed, upscale, ultra-chic new rooms feel like home away from home, just a block from the dock. We could sit on the front porch or our balcony for hours, sipping wine or tea, watching the passersby on foot, on 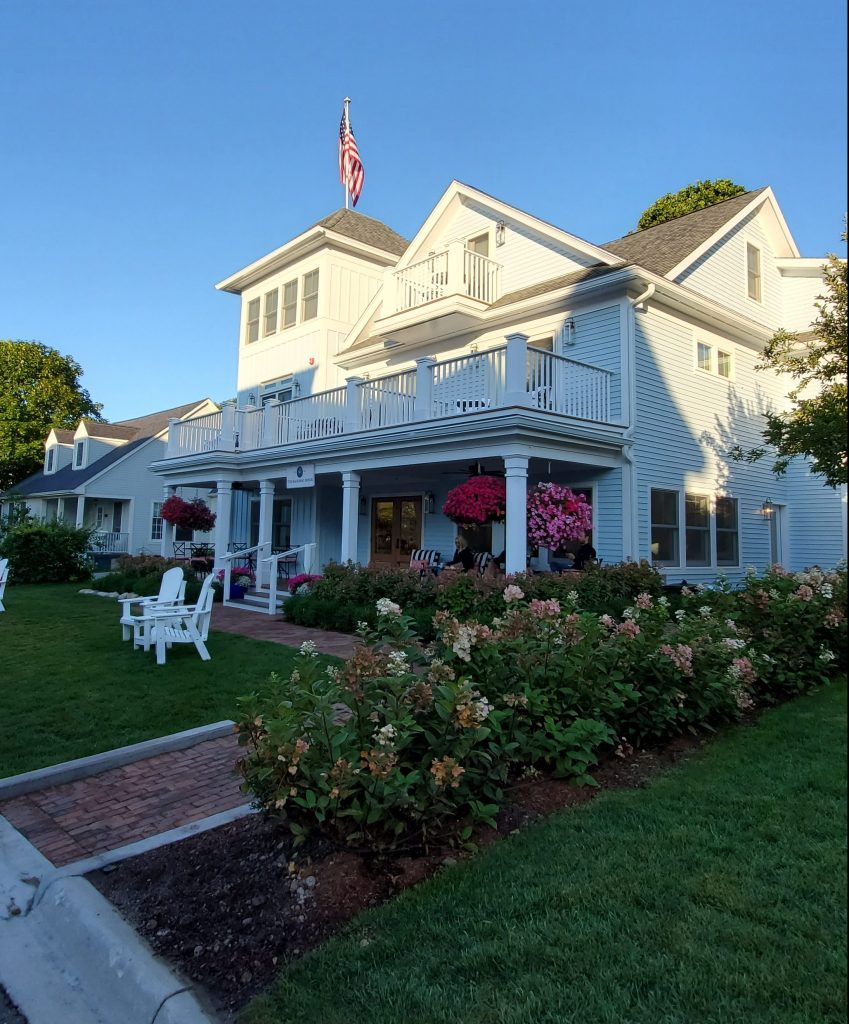 bike, horse or carriage with many noting, “there’s the Mackinac House.” A glimpse of a wedding procession and the garbage collection process by horse and carriage are equally entertaining. Music might drift down from the hill by the fort. The proprietor also owns Murdick’s Fudge, supplying hospitality in treats, beverages, and breakfast.

A horse and carriage picked us up at the Mackinac House and delivered us to the Wawashkemo Golf Club. We tried to practice the name but happily Wawa is the island’s familiar term. Since 1898 or questionably 1899 golfers have enjoyed the original design laid over the battleground of 1814. The British came up from the water, knocked on the fort’s door which housed only 20 soldiers at the time and easily took it over. Americans later retaliated to take it back and the canon remains on the course/battlefield. Historical plaques provide lessons along the straightforward course that embodies a links style. The Scottish look and feel come honestly from Carnoustie designer Alex Smith. Well maintained for over a century without irrigation, the character is still intact today with the original greens and clubhouse. A representation of Frank, the original pro is the logo for Wawa, but Chuck Olson has been carrying on in great tradition. He reveals the club history with a tour showing antiques and a 1901 Ladies Home Journal article that hangs on a wall, “Where Golf is Played.” To honor history hickory sticks are rented and two tourneys are held with players dressed in knickers. Chuck says 130 members are proud of their “rickety old place” and use the lockers to store booze since they have no liquor license.

We met one of the members on our Sip and Sail trip – Dick Riel and his wife Vickie. Dick said we should read the book about Wawa and followed up by sending us a copy, a prime example of how wonderful the island people are.

Sip and Sail is a lovely evening excursion from the island harbor to the Mighty Mac bridge, an engineering marvel, five miles long. The week before 400 brave souls in wetsuits swam the span for charity. One such soul pointed to the top of the suspension bridge’s tower where he had proposed to his wife, certain at that height that she would not decline.

We enjoyed the live music on the Sip and Sail while making new acquaintances. Locals frequently hop aboard to mingle with tourists. We were privileged to meet several who are among the 500 that stay year-round including the Riels. They make it through harsh winters with friends and progressive dinners. Nancy May’s granddad came to plumb the Grand Hotel which took two years. Nancy is a photographer committed to sharing and preserving the natural island setting, proud that islanders have never broken the chain of horse and carriage, except for an ambulance. Safety first.

Sip and Sail owners Bill and Molly Carmody often greet passengers coming and going. It’s told that Bill’s granddad hunted pirates in the South China Sea. Preston is an 8th generation captain who delivers sailor tales of the Great Lakes and beyond. 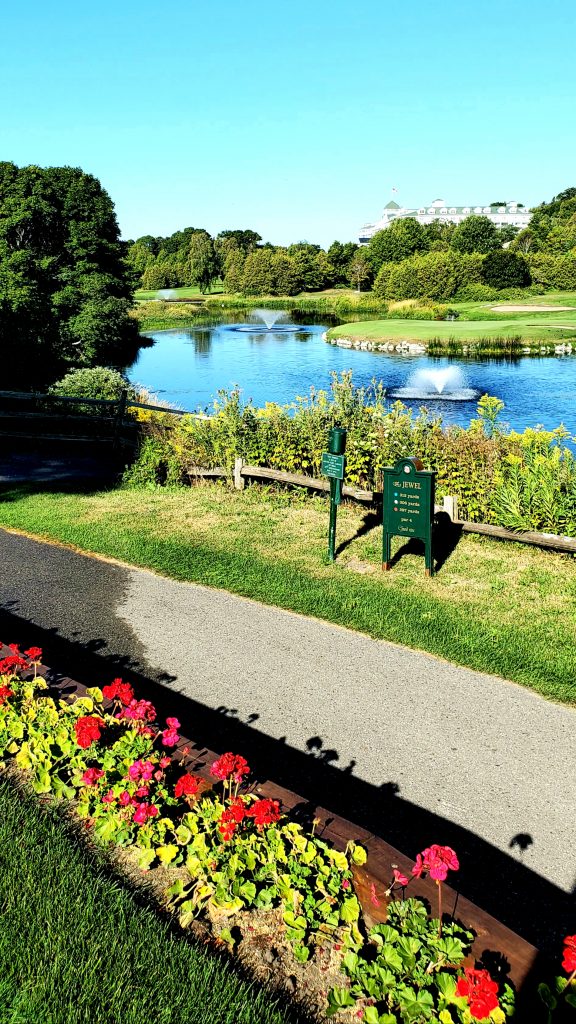 Having gone by horse and by sea, we decided to also bike. Rentals are very reasonable and the whole island perimeter can be pedaled within an hour, including stops to admire the crystal-clear water. Waves lap on shore where limestone cairns are creatively piled by visitors. We climbed 240 stairs to peer through Rock Arch as kayakers were marveling from the water below. 82% of the island is a state park, forested in the center and natives understandably thought it was the center of the universe.

Captain Preston asked us, “How do you tell the story of this magical place with just words when it tickles all the senses?” Hmm, yes, all the senses. The smells of horses, florals, lake and fudge waft intermittently and meld together. The sounds of the canon, clip clop of hooves, clanging of reins and church bells break the silence. The long horn of freight liners warns of their proximity. Music by Myk in the Pink Pony on the 50th anniversary of Woodstock rocked the locals, merging with tourists. All ages enjoy the oldies. Bachelor(ettes) party their last single hours in a safe fun haven. Kids are getting married right where their parents did, overlooking the water. Everyone who comes to the island plans their return. It’s not made up, nothing fake about it. It’s real life preserved, old fashioned, sometimes inconvenient but always charming. Nostalgic, captivating and scintillating, a mere 30 hours on Mackinac Island was a dream come true for us. Two hours from Traverse City: https://www.michigan.org/golfing