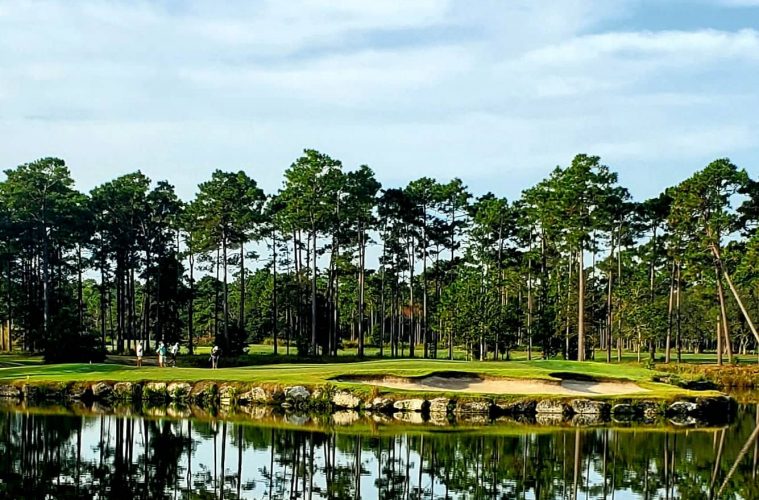 Myrtle Beach for the World Am or Any Grand Ole Time

Myrtle Beach is famous for the Grand Strand of more than 80 courses along the southeastern coast and The World Am, touted as “Your Major”. The 38th annual World Am in Myrtle Beach was our fourth experience participating and we understand why so many make it their annual golf trek. This year about 3500 golfers competed at 55 golf courses and celebrated new and old friendships. Players are slotted in flights based on gender, age and verified handicap for fair play. Imagine the logistics of scheduling that many players, beginning with registration on Saturday and Sunday at two of the sponsoring PGA Tour Superstores before the Monday round. It all went like clockwork! Players received a gift bag with shirts, gift certificates, and other goodies, along with their schedule of tee times at four courses and badges for entry to the “World’s Largest 19th Hole” inclusive of food, drinks, live entertainment, and camaraderie at the 120,000-square foot Myrtle Beach Convention Center. All this for a $600 entry fee, or less for the early birds. 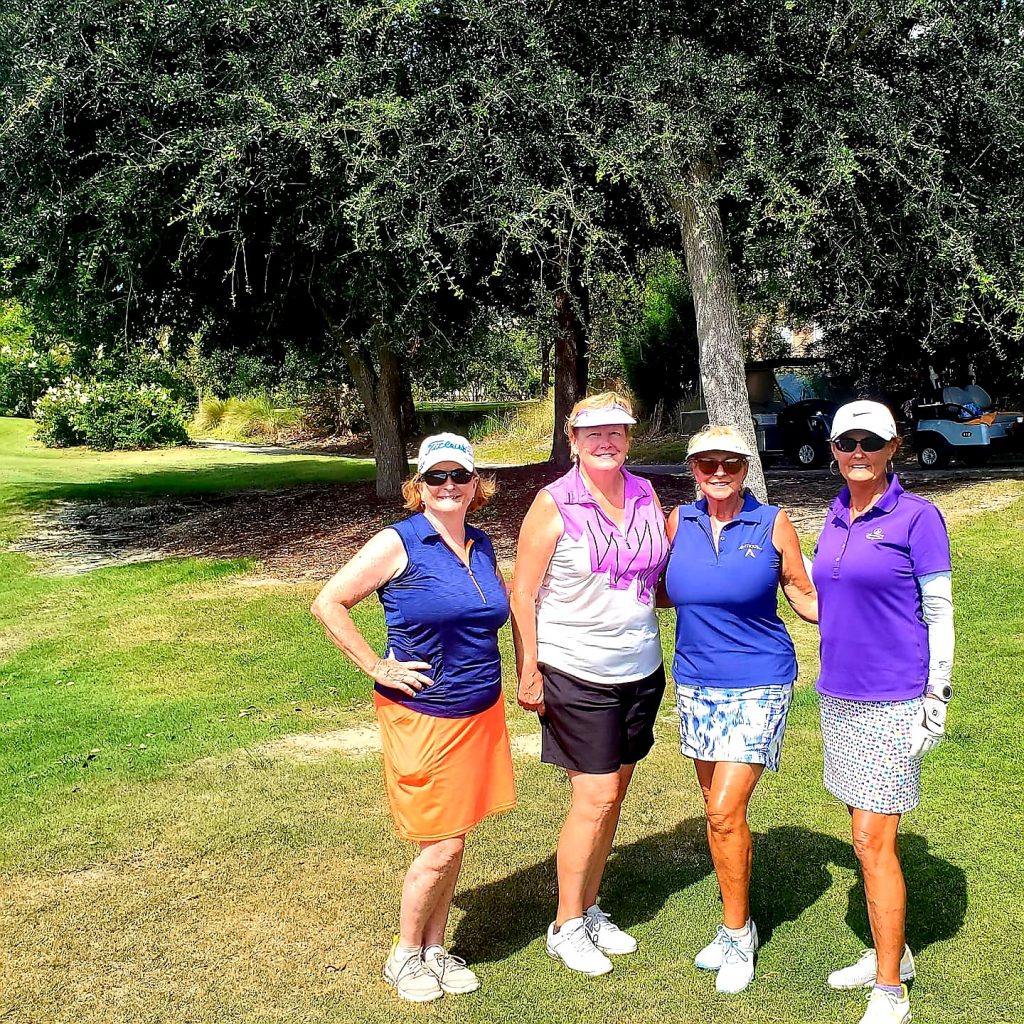 Here’s a day-by-day synopsis of Our Major:

Monday – She was dropped off early at the Barefoot Resort and Golf Club where rocking chairs on the veranda provide a relaxing view of what could be chaos as bags were attended for a guys’ flight playing the Dye Course and gals playing the Norman Course, both considered the most difficult of the four courses at Barefoot. It was very orderly with a shuttle running every few minutes to the driving range. Almost 50 ladies in her flight were readying their carts, some with fancy seat blankets and even battery-operated fans. Her cart partner, Cheryl, was one of those, for an immediate appreciation of pairing. Many of the gals donned dresses as if going to golf church which is quite appropriate given the on-course references to golf gods and Jesus’ shots when balls skipped across water to safe landing. The Norman course was well-manicured with a scenic routing around waterways. Hole 16 was a short par 3 over a bluff where she made closest to the pin and Cheryl broke out the Fireballs for a birdie toast, then offered a ride home to The Caravelle Resort. 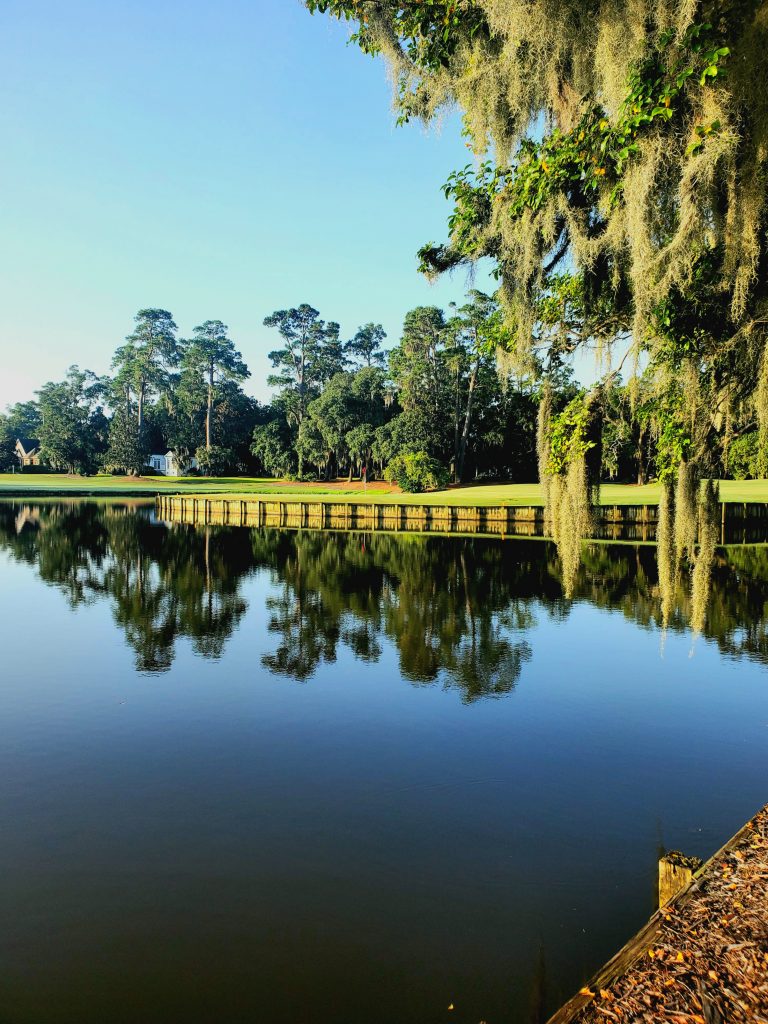 He drove south near Murrel’s Inlet for an extraordinary experience at Heritage Golf Club. It is the epitome of lowlands golf with towering oaks draped in Spanish moss. There were numerous water crossings and island green scenarios. It was his introduction to a group of guys from Iowa, including a former Senator and during the tournament, a member of this group was one of his partners in each round.

Back at The Caravelle Resort, it’s beach time before a shower and off to the 19th Hole where every night we ran into old friends at the ING (International Network of Golf) booth and visited more of the 48 exhibitors. Everyone has the option to nibble or feast at one of thirteen local food stations, with varying menus nightly. A long putt and pitching contest are fun for participation and gallery watching while toasting the play by play of the day recaps with a 12-year-old MacAllan or any beverage of choice. Bounce! Party Band kicked off the nightly music show in the adjoining ballroom. Alice collected her closest to the pin prize – a dozen Saintnine golfs balls vividly embellished with one of nine mental characters, and we retired to our comfortable suite at The Caravelle Resort to rest up for the next round. 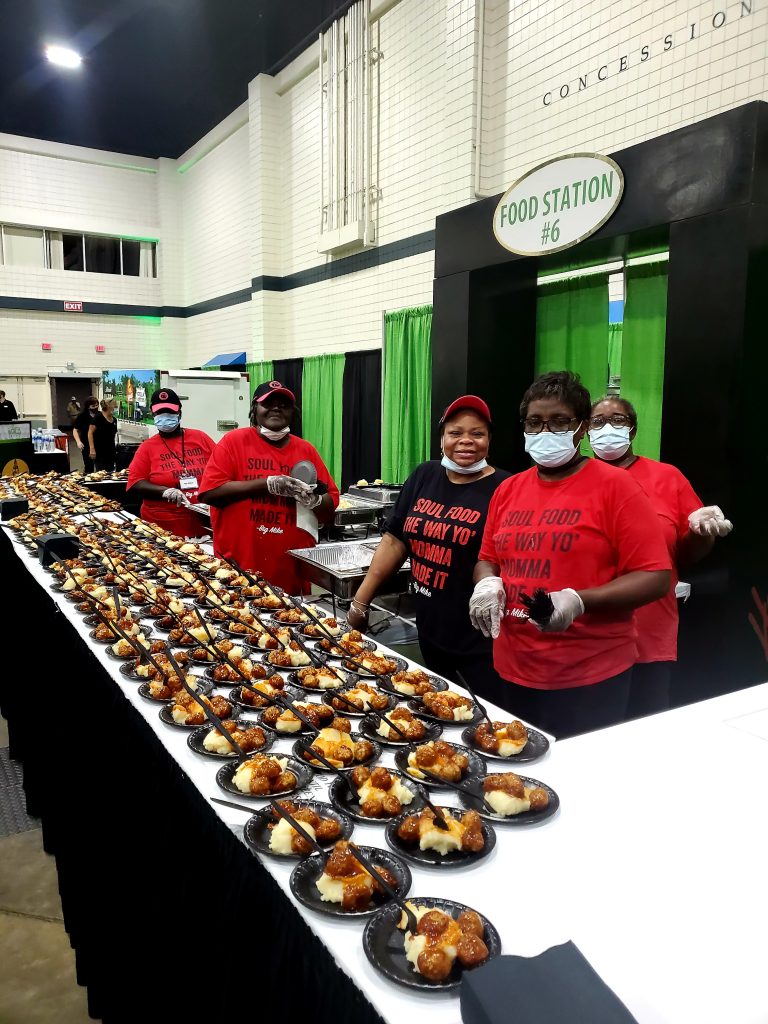 Tuesday – We moved up to the state of North Carolina where she dropped him off at Tiger’s Eye and one of the Iowans greeted him as Robert Redford, nice. He had played here before and knew the course demands a good tee shot and accurate reading of the greens’ slopes. The group shared stories of family, politics, and life in general, with sportsmanship at the forefront – cheers for good shots and laughter for bad ones. 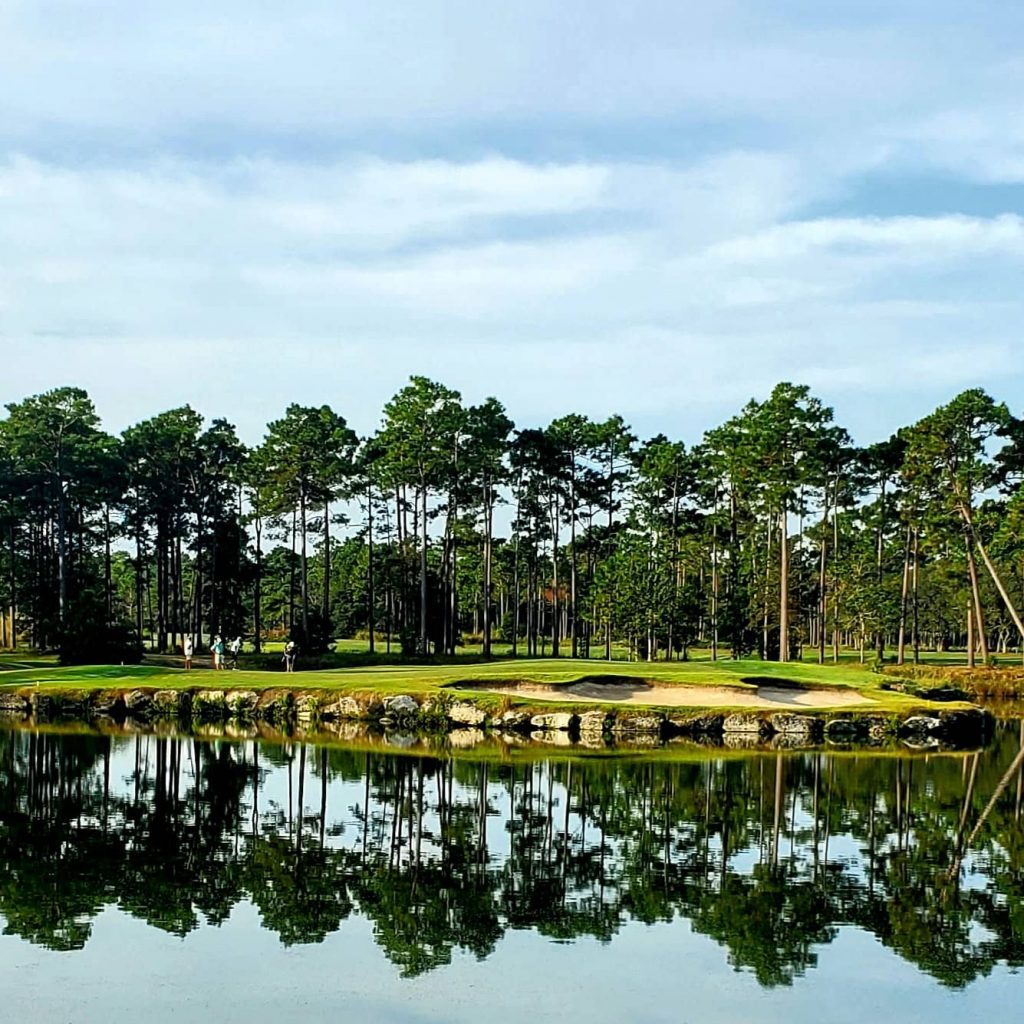 She drove further north to Lockwood Folly Country Club along the  Intracoastal waterways where the backdrop for the practice green is Zen like. She played with her new Saint Nine dragon focus ball and focus she did, riding with a Clemson gal who had previously won this flight. At the 19th Hole her name was at the top of the leaderboard for her flight, very exciting for that one evening (spoiler alert).

Wednesday – She dropped him off at Pine Lakes Country Club, the granddaddy of all courses. The start of the round met a downpour for about 15 minutes. The poor souls that teed off first were drenched but the skies cleared, and bright sunshine unveiled one of the best conditioned courses in Myrtle Beach. The good weather agreed with his foursome as each player bettered their previous scores. It was moving day at the World Am. 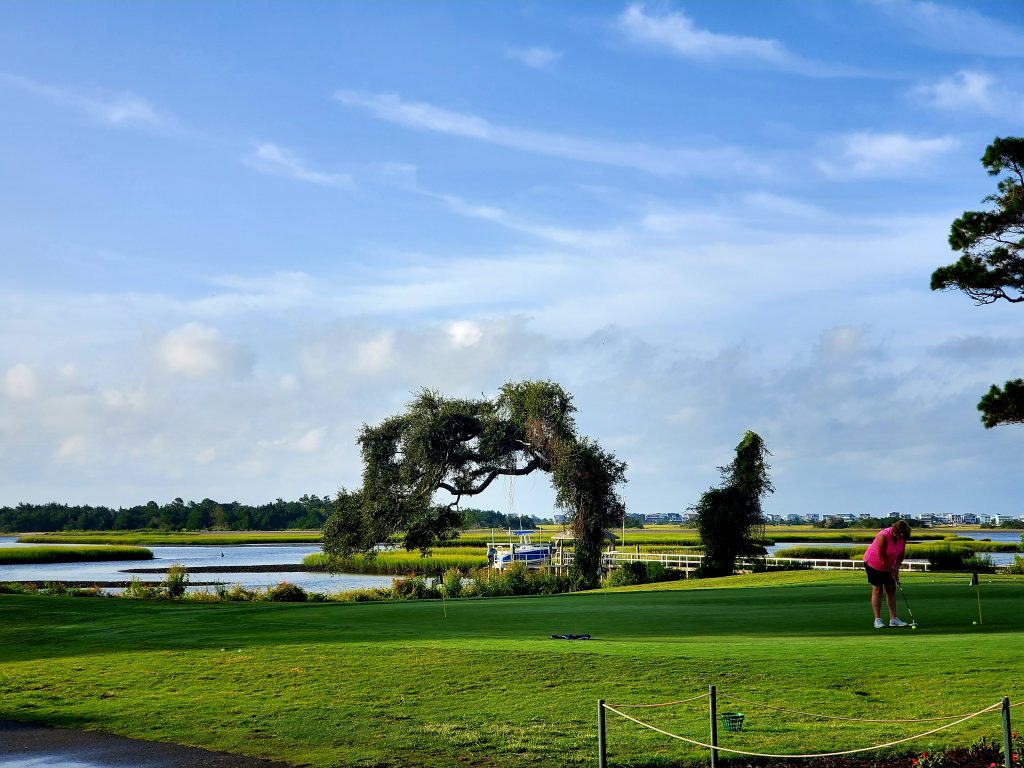 She played Wachesaw Plantation East in Murrells Inlet with nerves of silly putty, blowing the lead but maintained a tie for third. Once a rice plantation and host to several past LPGA tournaments, Clyde Johnston designed the course with Scottish type fairways where there was a little too much time spent hunting for balls in the woods and deep rough. Chatter picked up before and after the round as more encounters were made and the flight became a sorority. 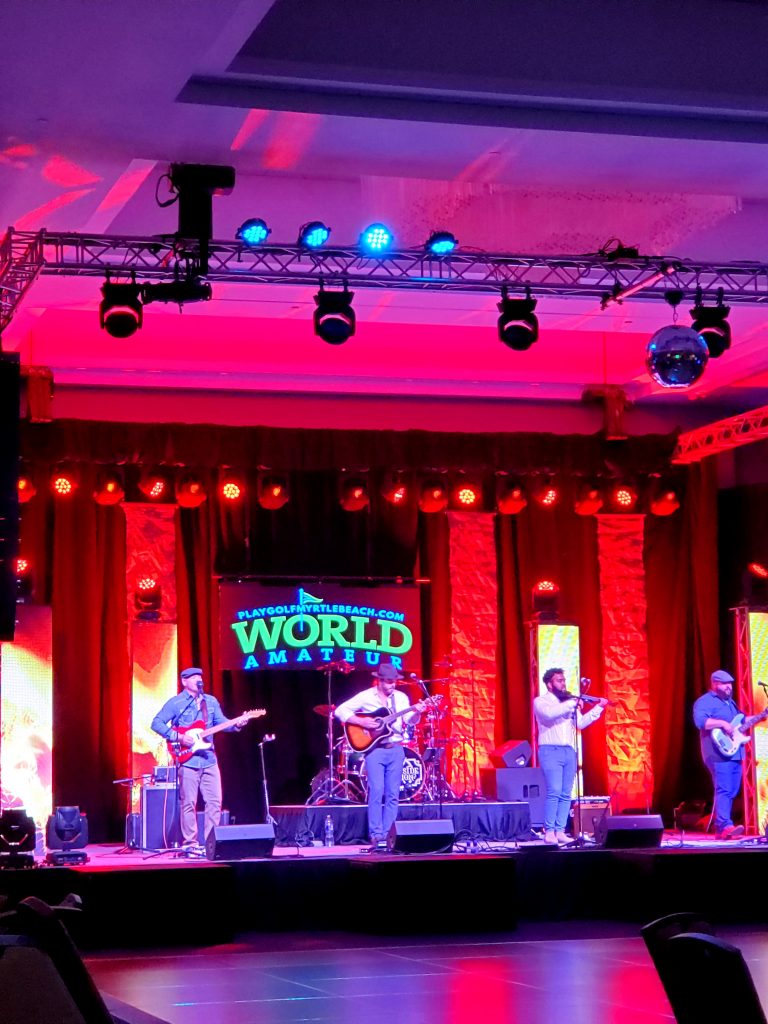 Thursday – He played Arrowhead Country Club like he wanted to all week. The course provided a better challenge because of the numerous holes surrounded by water on both sides of the fairway, not for the faint of heart. His group from Iowa included an optometrist and a former rock band member from the 70’s. Shots of Fireball kept the atmosphere rocking.  Saving his best score, even par for the final round, he placed in the top ten, a great way to end the tournament.

She played The Long Bay Club, a Jack Nicklaus Signature Course that is long on water with an island green on 13. Tammi in her foursome carried a duck Butthead Cover, wore Antigua clothing, and hailed from our state of Arizona – instant kinship. (Our first time in the World Am was when our Butthead Covers were exhibited at the 19th Hole, so this seemed like a reunion with one of our kids.) It was the make-or-break final round and going well until number 15 which has a creek running across the fairway and then continues down to the green. She happily laid up, hit over the creek and had visions of landing in regulation for a birdie putt, but, somehow the third shot went right into the creek or ditch, as did the next and the next again, ditching any chance of moving back up. Fourth place won her a $75 gift card for the PGA Tour Superstore and a couple weeks later a surprise plaque arrived in the mail. The real prize was experiencing golf’s spiritual connection with new and old friends, making every participant a winner. 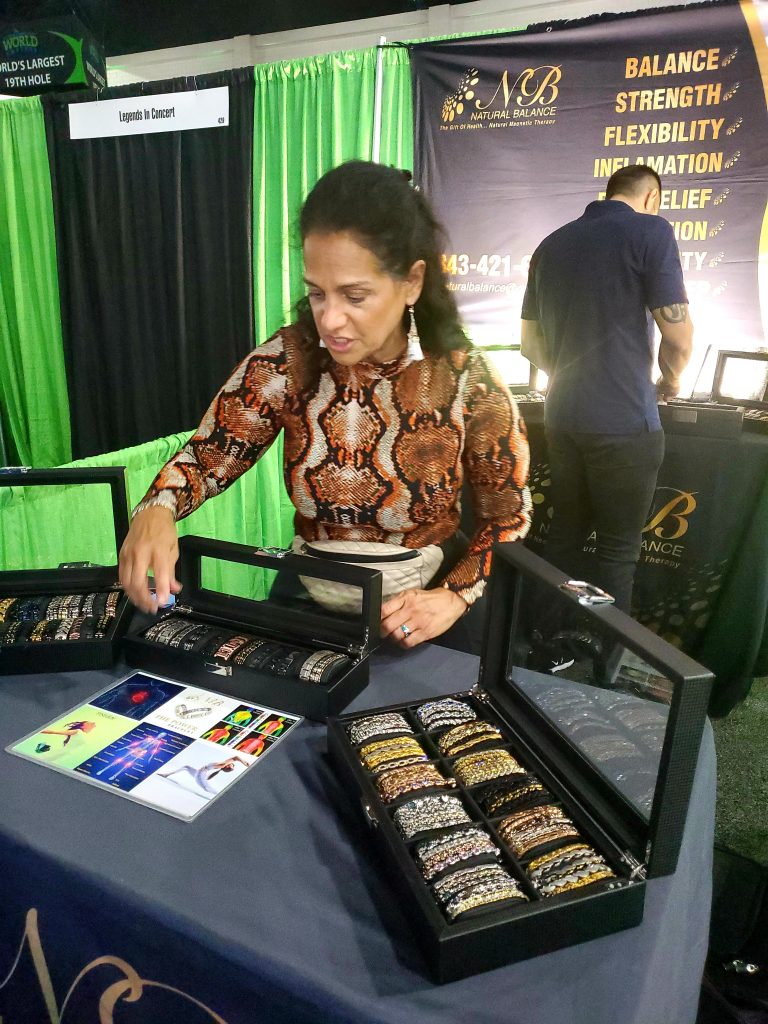 Every day after play, the beach was a consolation prize with time for frolicking in the waves and relaxing in the sand, watching the pelicans, dolphins, and kite surfers. The late August, early September weather was more moderate than expected and the ocean temperature was just right to refresh. And, each night Myrtle Beach-native and former PGA Tour player & Golf Channel commentator Charlie Rymer served as Master of Ceremonies at the very fun 19th Hole, giving away cash prizes for long putt and chipping contests, in addition to $10,000 in merchandise to random names drawn the final night. We bid farewell to friends and favorite exhibitors – Casa de Campo, Golf Buddy, Birdies and Bows, ING, Natural Balance – more on them in the future. 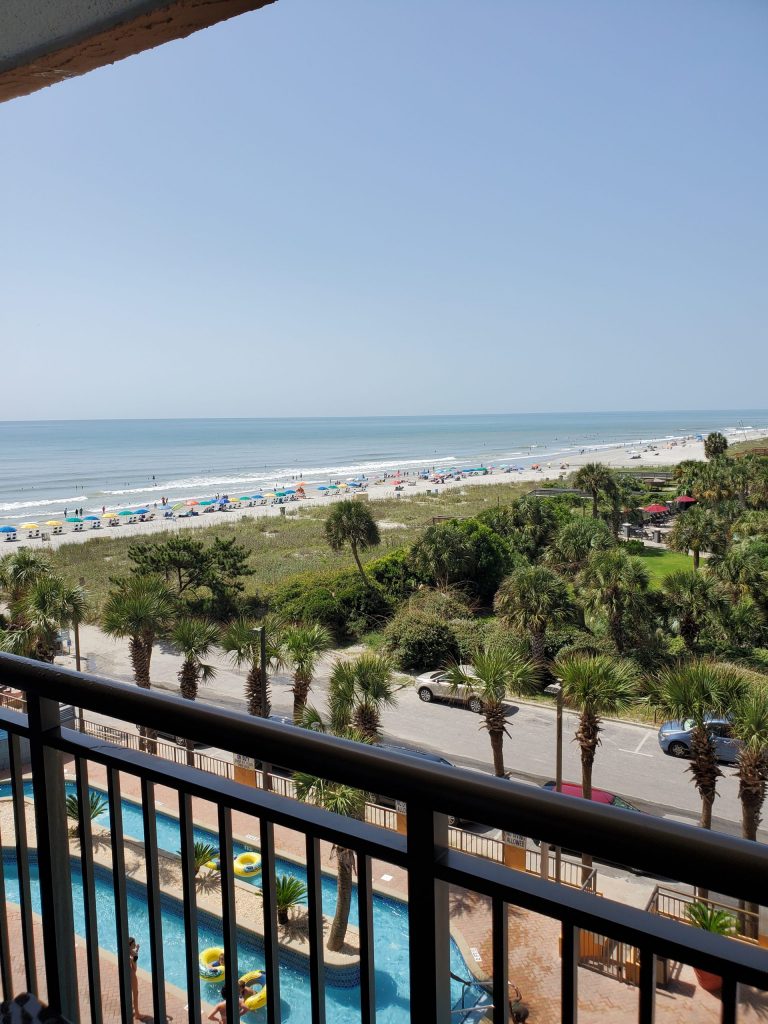 Friday – We took our final stroll along the beach absorbing the sound of the waves and smell of fresh ocean air, then checked out of The Caravelle Resort for our drive home to Arizona after three great golf months across the country. While we missed the final round, the winners of each flight competed, and Jean Oberg from Alice’s flight took the cup home, the first female champion in twelve years. Congrats to her and all the sponsors and personnel that made this event one to cherish.

It is not too early to sign up for the 39th edition of The World Am to be held August 29 – September 2, 2022 or plan a golf vacation for any grand ole time in Myrtle Beach. You will not be disappointed.