Virginia Golf Vacations is ready when golf groups are with affordable lodging and a splurge of courses. When Kingsmill and Golden Horseshoe Resorts don’t fit the bill, the Best Western Historic Area Inn in Williamsburg awaits where the entry is updated and upbeat with pure white retro chairs and stools for the grab and go breakfast or a distanced meet and greet with self-serve coffee and tea 24 hours a day. Guests are welcomed with breakfast instructions and a visitor guide detailing local options for site seeing and dining. We had previously toured the 18th century Colonial Williamsburg, screamed on the modern thrill rides at Busch Gardens and played several courses so this short trip was all about discovering more great golf. 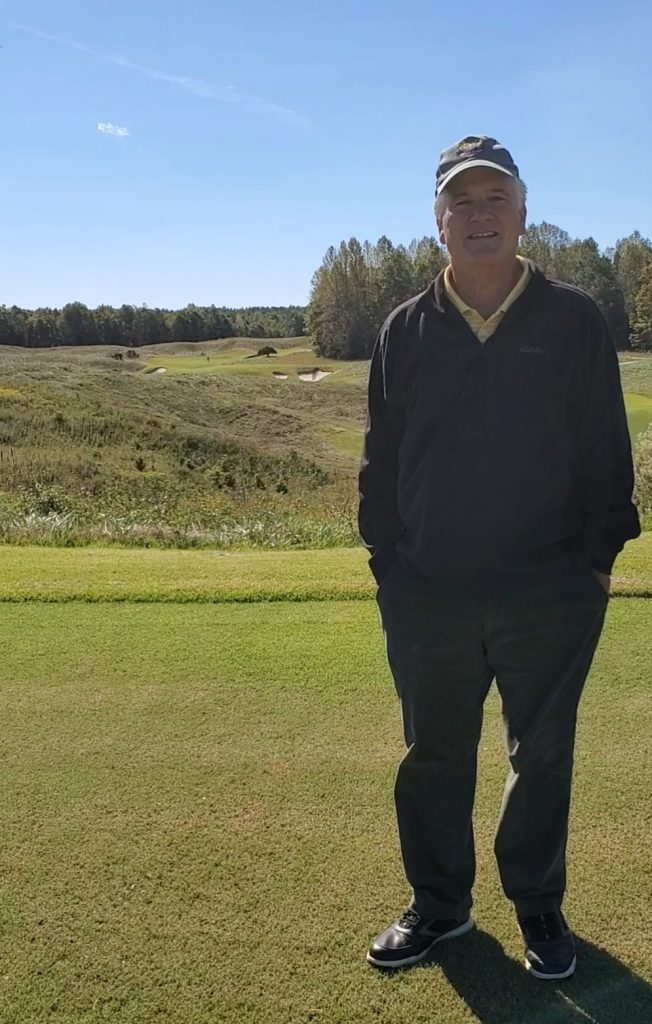 Thirty minutes away, Royal New Kent was a treat with co-owner Willie Downs. Willie is such a fan of the late designer Mike Strantz, that he compiled a mini biography. He could also write a book on the history of the area. The former RR Donnelly exec grew up here as did the first First Lady, Martha and is committed to its historic preservation even as it has become the fastest growing county in Virginia.  This is evident at the Royal New Kent clubhouse where a stained glass above the pro shop entrance represents Royal New Kent on one side and Ireland’s Royal County Down, after which it was modeled, on the other. Inside an Irish tub cart that starred in the Quiet Man with John Wayne and Maureen O’Hara and later was owned by Arthur Godfrey is the focal point before eyes are drawn to the course view through the window.

Willie shares how the avid golfer Mike Strantz was an artist first and foremost. Career wise, he pursued golf course agronomy at Michigan State and worked with Tom Fazio before creating his own design team and business. We loved his work at Wild Dunes and his Caledonia and Tobacco Road creations, so we were thrilled about playing Royal New Kent.  Ranked #1 New Upscale Course in America by Golf Digest in 1997 it won many awards before it was sadly neglected and closed two decades later. A new partnership led by Wingfield Golf rescued the venue and reopened it in 2019 after part of Strantz’s original team restored it to his authentic design. Royal New Kent is “Strantzland” from the start. If you ever played Tobacco Road you might have an idea of what is in store. The imposing first hole is a fitting preview to the puzzle of where to hit. The horseshoe shaped number two we nicknamed Strantzilvania, discovering where not to hit. Golfers are teased with some wide-open fairways then bam #14 with Colonial Downs in the distance has a throat to be squeezed or you might feel like yours is. A par is quite pleasing on any hole and when you finish 18, you want to take your newfound course knowledge and play again, and again. 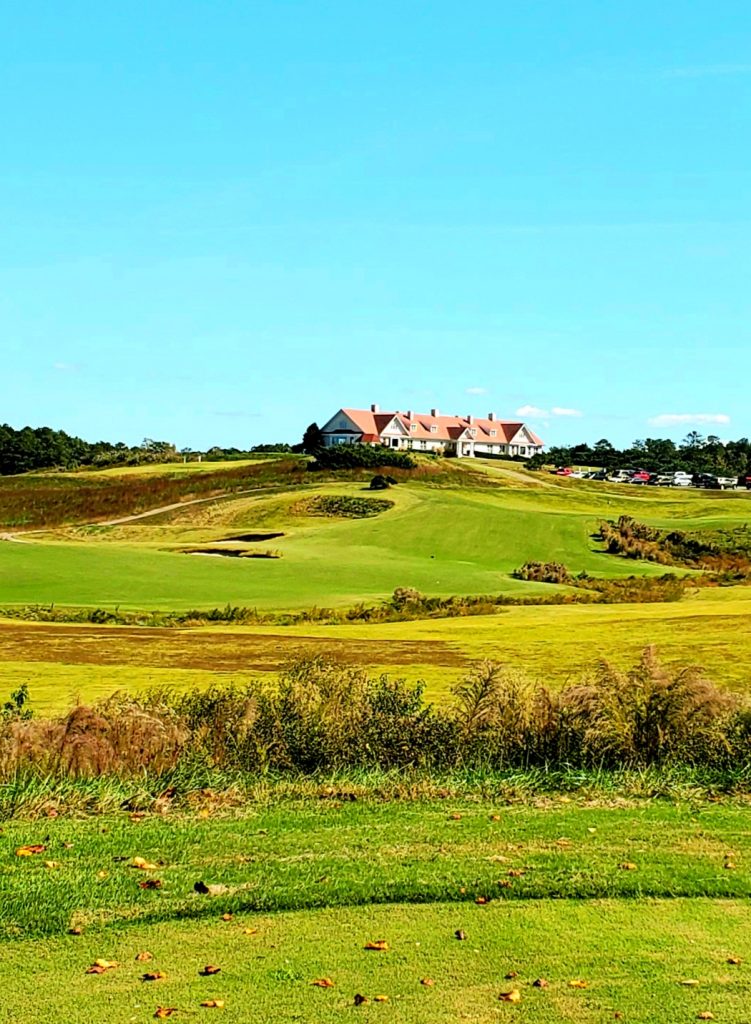 Strantz believed golf courses should be roller coasters not merry go rounds since that is where the long lines are at Disneyland. Royal New Kent fulfills his thrills and chills philosophy while Willie Downs’ wife, Debbie rehabs merry go round horses so both coasters and carousels are covered. Debbie also restores and builds carriages for miniature horses which she drives for pleasure and showcases a couple paintings in the clubhouse around the corner from Strantz’s original etchings framed on the wall. Mike loved riding horses to feel the land before sketching his holes. Common interests intertwine. In addition to their part in restoring the course, the Downs are restoring Crumps Mill and pond on their property not far from St Peter’s Episcopal Church where George and Martha Washington were reportedly wed. Art and history marry well. 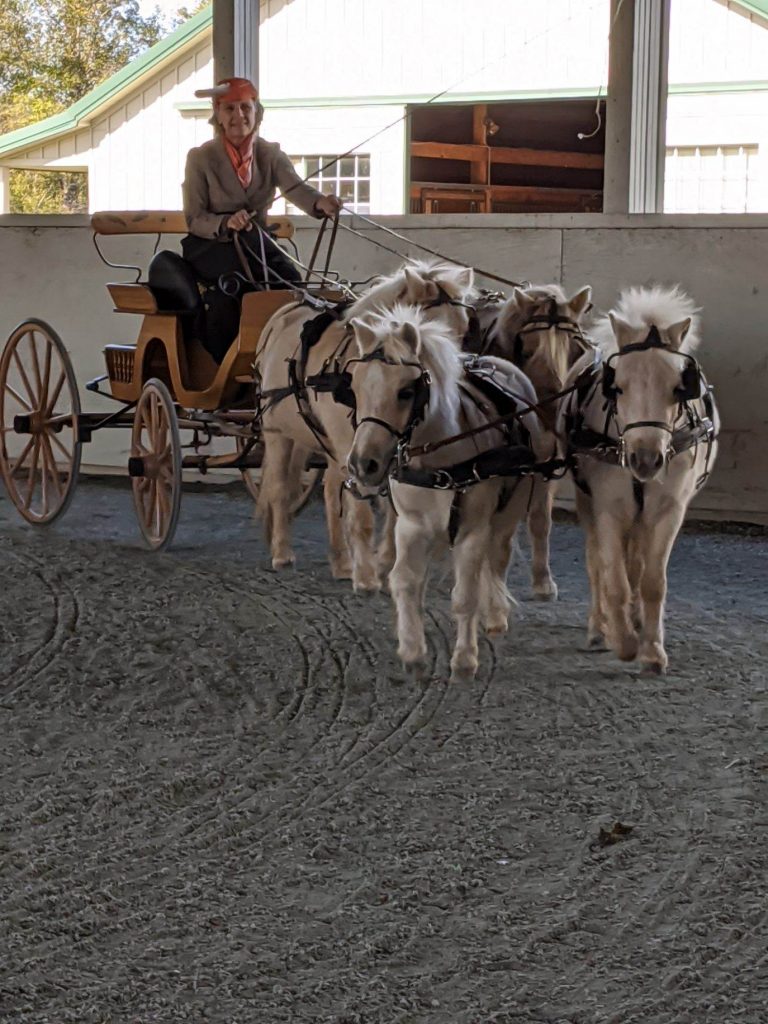 A few minutes away is the Club at Viniterra Golf, a signature course built in 2009 by Rees Jones. Known as the Open Doctor he lays out a clear prescription for playing this course with open fairways, subtle catch basins and 4 1/2 acres of greens. Elevation changes make it a roller coaster ride as well. In fact, golf carts are gas powered due to the steep hills and are required to navigate the ten-mile course and bridges. Sharing the same beautiful woodlands, co-owner Noel Tuck compares the courses saying, “Viniterra is more succulent, Royal New Kent is more opposing.” 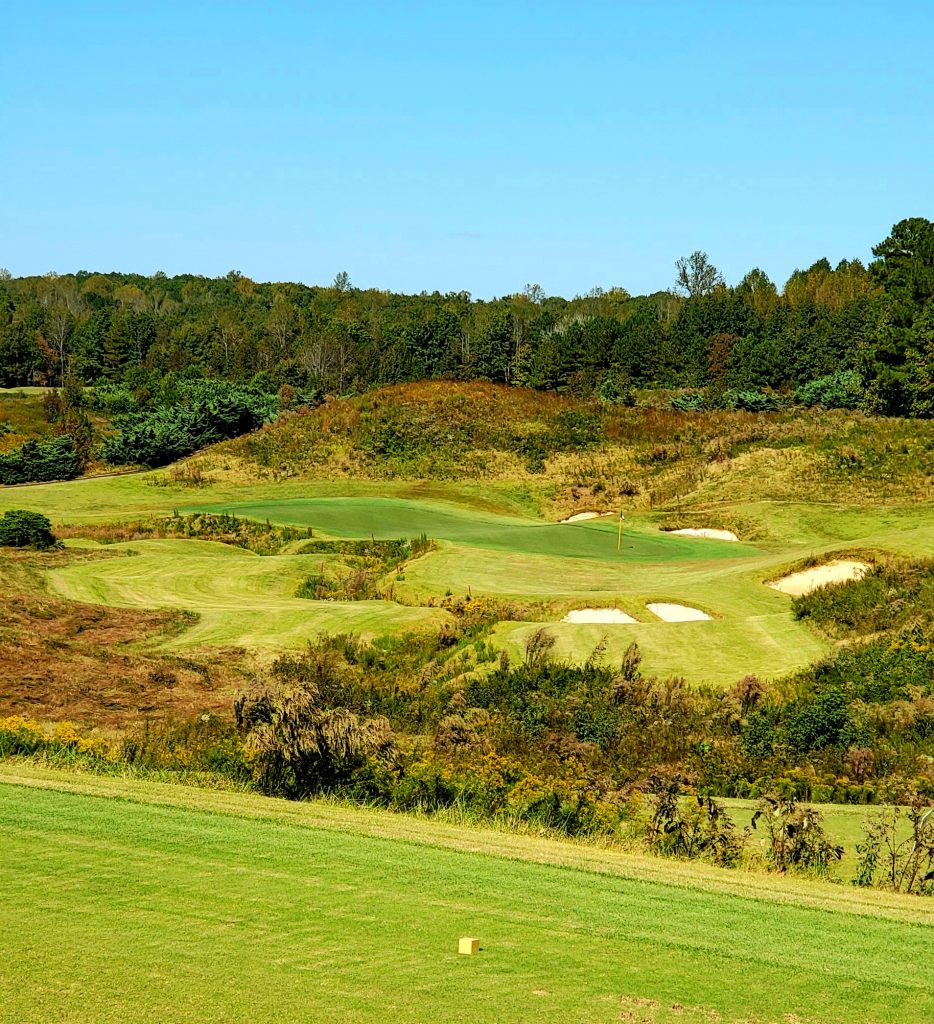 Reward a great game or feel better after a high score across the street at the New Kent Winery. The Dombroski family reclaimed bricks, wood and trestles from the Southern Railway in Richmond for 18th century construction of the building. There is plenty of outdoor seating and live music. If you like reds, try their Norton. If you like beer, the son’s Talleysville Brewing is now on tap. 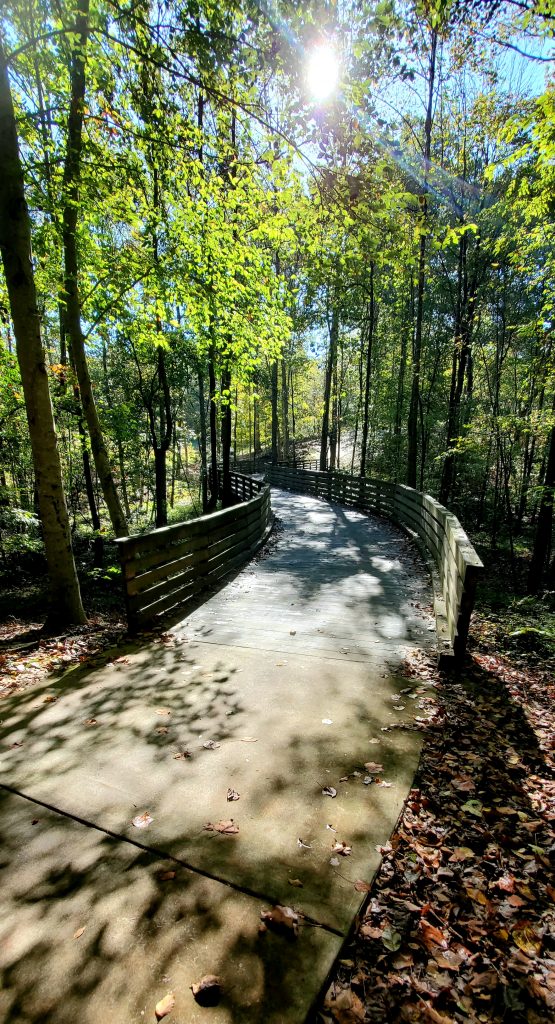 Williamsburg is rich with taverns where politics of yore founded the country. Wineries, distilleries, breweries and pubs add to the drinking options for solving the country’s woes today or so we might wish. For breakfast conversation, a pancake house appears on most corners. Fresh seafood abounds thanks to the proximity of the Atlantic Ocean. At Way Point Seafood and Grill the German owner celebrates Octoberfest with a special menu and party that was of course limited by the Covid 19 of 2020. After crab cakes, the schnitzel is like revisiting Munich. Willie Downs’ food recommendation which he repeated several times was Baskin Robbins pumpkin ice cream. There was no room.

A final round at Williamsburg National Golf Club reinforced the natural appeal of the area where history still matters and wooden bridges, a way of the past are now a path to the next tee box. Poplars and oaks mix with pines and maples to guard the Yorktown and Jamestown courses. Homes surround a small lake on Yorktown’s number 6 where a deer pranced out across the fairway into the woods. The back nine has fewer homes so even more nature. Three fairways converge around the lake culminating at 17 leading to the final hole and the tunnel return to the clubhouse where daily specials like a steak sandwich on the patio nourishes for the next journey. Safe travel is a choice we’re happy we made to play around in Williamsburg. 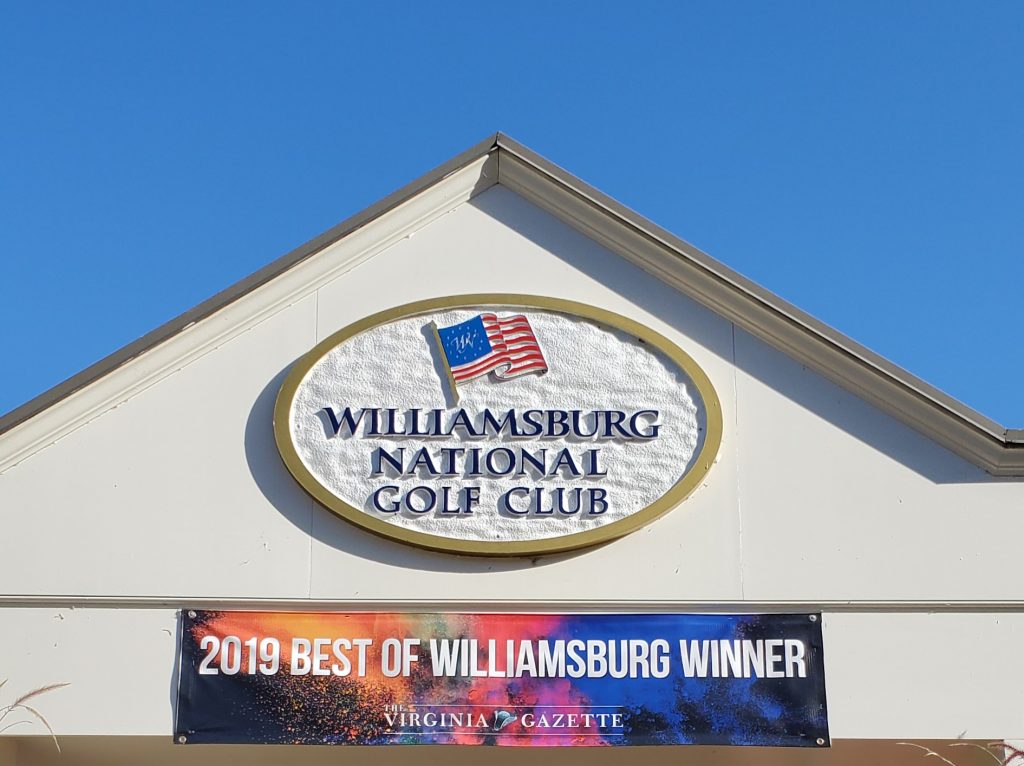 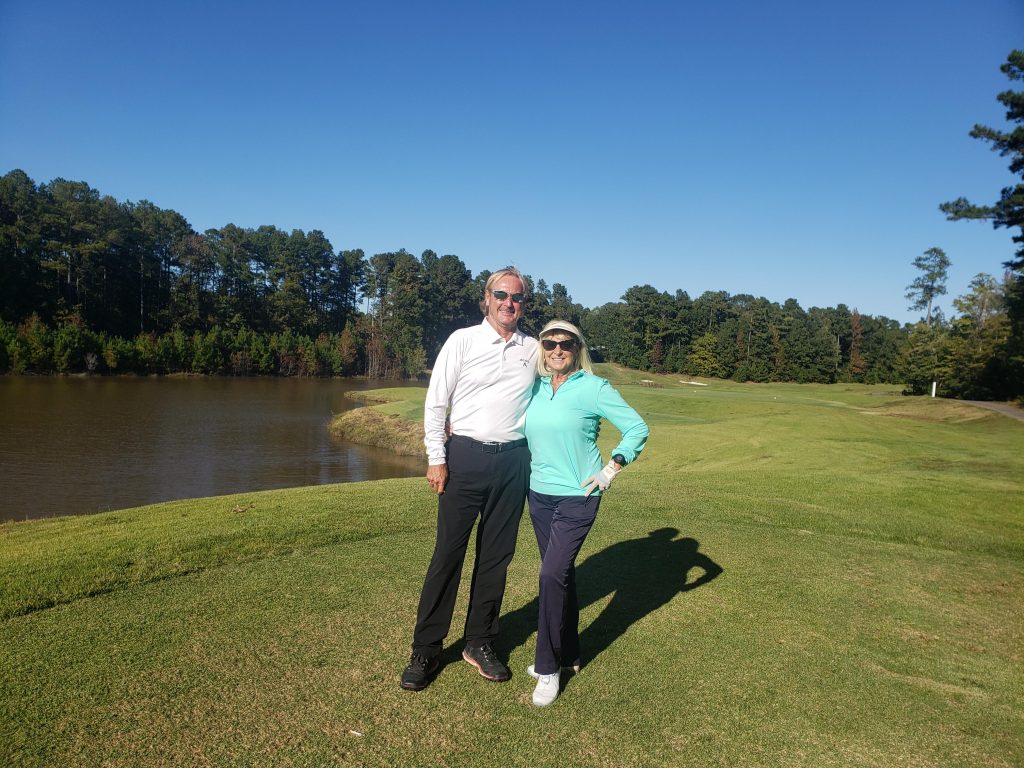