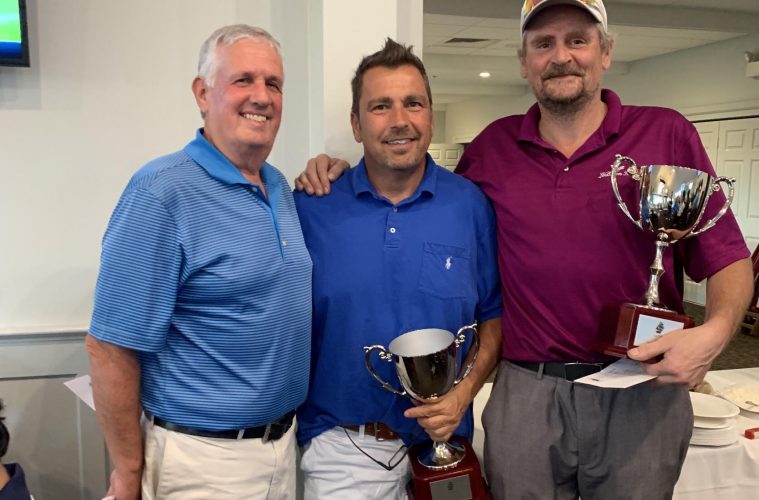 Two beautiful days were enjoyed by the amateur golfers as 36 teams battled for the 36-hole, best ball of 2 Gross Stroke Play Championship.

Two teams were tied at 7 under par 133 at the end of regulation play for 36 holes.

Dimarzio birdied the 16th and 17th holes to forge ahead by 2 shots going up 18, but both he and partner Stoddard 3 putted for a bogey 5 on the difficult par 4 to finish at 7 under.

Cook and DeBortoli, playing in the final group, came up 18 at 6 under par and needed a birdie to force a playoff.

Cook’s 165-yard second shot from the fairway landed just short of the pin and trickled past the hole, leaving him with a curling, downhill 9-foot birdie putt.  Needing the putt to tie, Jason calmly stroked it in the center of the hole for a dramatic birdie three in front of the gallery at 18.

The teams went to the par 4 1st hole for the sudden victory playoff.

Cook drove it in the center of the fairway, leaving him with a 90-yard shot to the green.  His partner DeBortoli was in the left rough and hit his second shot over the green. Dimarzio and Stoddard both hit tee shots in the rough, leaving difficult second shots.  Both missed the green in regulation.

Jason Cook hit his second shot to 18 feet from the hole.  DeBortoli made his 22-foot putt for a par 4. Dimarzio missed his par putt, and Cook narrowly missed birdie three and made par also.  Stoddard then slid a tricky 8-foot par putt past the hole, narrowly missing four, and Cook and DeBortoli were champions.

This is the second Gilholm Cup title for Paul DeBortoli (he won in 2006 with Kevin Nery, CCNB) and the first for Jason Cook.