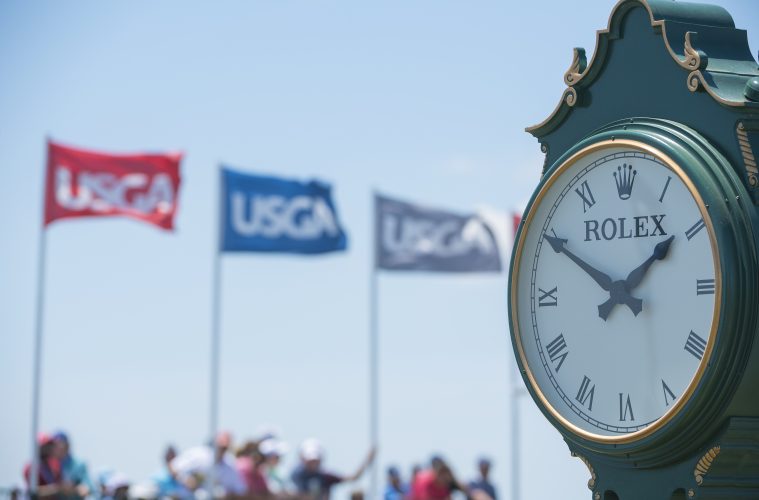 ROLEX CELEBRATES 40 YEARS AS OFFICIAL TIMEKEEPER AT THE U.S. OPEN

The oldest of the United States’ three Majors, the U.S. Open was first held in 1895
at the Newport Golf Club, Rhode Island. Since then, this fabled event has been
staged at some of the most iconic golf courses in the country. In 1980, Baltusrol Golf Club in New Jersey was the venue and it was there that Rolex’s relationship with this tournament began. That year the Swiss watchmaker also became the Official Timekeeper of the United States Golf Association (USGA), a role it retains to this day.

For more than 50 years, the bond between Rolex and golf has evolved and strengthened. The partnership was founded with a pioneering agreement in 1967 when Arnold Palmer, joined by his great friends and rivals Jack Nicklaus and Gary Player – The Big Three – became the brand’s first golfing Testimonees. In the ensuing decades, Rolex has become part of the very fabric of the game through pivotal alliances not only with the USGA but also with The R&A, its partner in governing the sport worldwide. This rich golfing heritage, based on a shared commitment to perpetual excellence, has been the basis for Rolex and the U.S. Open’s long-lasting association.

This year, the Championship returns to the always testing West Course at Winged Foot for the sixth time in its history, having first been played at the Mamaroneck club in 1929. Renowned for its tight, tree-lined fairways and thick, punishing rough, Winged Foot is true to U.S. Open tradition, demanding accuracy and precision – qualities reflected in Rolex’s watchmaking endeavours.

One Rolex Testimonee familiar with the challenges presented by Winged Foot is American Phil Mickelson, who narrowly missed out on lifting his first U.S. Open trophy when the tournament was last played there in 2006. One of the greatest players of all time and a golfer who continues a relentless pursuit of perfection, the 50-year-old is set to contest his 29th U.S. Open. Victory would make him just the sixth man to complete the career Grand Slam of winning all four Major trophies.

Joining Mickelson as part of a formidable group of Testimonees competing at the 2020 U.S. Open are golfers who embody the style and exceptional levels of performance for which Rolex is renowned worldwide. Leading them will be Mickelson’s greatest rival over the past two decades, the former World No. 1 Tiger Woods.

The most successful golfer of his generation, Woods has won 15 Major titles since 1997, including the U.S. Open on three occasions (2000, 2002, 2008). Almost 25 years after his first Major triumph, he remains a contender in all the Majors, as evidenced by his victory at the 2019 Masters at Augusta National, which Rolex has partnered since 1999. He returns to New York state aiming to close in on the all-time record of 18 Major titles held by fellow Testimonee Jack Nicklaus.

Among Woods’ rivals at Winged Foot will be the current World No. 2, Rolex Testimonee Jon Rahm. The Spaniard reached the top of the Official World Golf Ranking for the first time in July when he won the Memorial Tournament. This victory, coupled with his tie for third in this event last year at Pebble Beach Golf Links, are further confirmation that he has the all-round game to go one step further this year and claim his maiden Major title.

Other Rolex Testimonees competing at this year’s U.S. Open who have already tasted Major success include Australians Jason Day and Adam Scott, 2015 champion Jordan Spieth, and the in-form Justin Thomas who has enjoyed an exceptional 2020 season and enters the tournament tied for most PGA TOUR victories this year with three. Members of the Rolex New Guard – a talented group of young golfers all keen to make their mark on the sport – seeking their first Major trophy include Joaquín Niemann of Chile and American duo Cameron Champ and Matthew Wolff.